Get to know about iCalendar, its uses and how it is used in the project management software, Projectsly.

iCalendar or iCal, as it is commonly called, is simply a computer file format for storing calendar information. From the get-go, it was based on the vCard format, which is essentially an electronic format for storing business cards. iCal files usually have the file extension ".ical" ".ics" ".ifb" or ".icalendarSync" with a MIME type of "text/calendar".

The term is not to be confused with iCal, the former name for the commercial application "Calendar" developed by Apple Computers.

The Projectsly's iCalendarSync in project management app is designed to be an open standard to operate within many different applications efficiently. Simply put, it lets products from many vendors transfer calendar information between each other.

Where Does iCalendar Originate From?

As a standard, iCalendar Sync was first defined as RFC 2445 in 1998 by the Internet Engineering Task Force (IETF), an Internet Society (ISOC) activity. ISOC, as a non-profit organization, was created in 1992 to serve as lead on Internet-related standards, education, and policy.

The RFC 2445 document was reportedly authored by Frank Dawson of Lotus Notes Corporation, a company now operated by IBM, and Derik Stenerson of Microsoft Corporation.

The iCalendar sync standard was refined in 2009, becoming RFC 5545, then it was edited by Bernard Desruisseaux of Oracle Corporation. The purpose of this was to resolve some ambiguities from the original standard and remove some features that were no longer required.

RFC 5545 is now considered the iCalendar sync standard and supersedes the previous RFC. RFC 7986 was published in 2016. It adds to the original iCalendar RFC by defining new properties to support conferencing systems and the main VCALENDAR object, including a calendar name, description, and refresh interval. 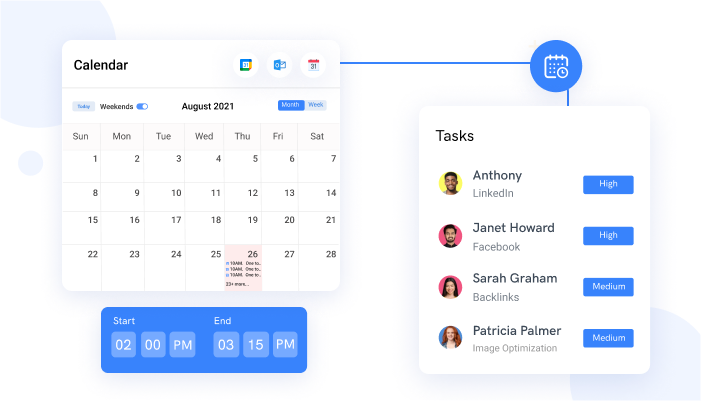 Where can iCalendarSync be Useful?

Humans do not need things that serve no use to them, but luckily, since it was created decades ago by those brilliant minds, iCalendarSync has managed to maintain its usability. It has found use in much major scheduling or calendar software, including email clients that provide calendar functionality. Examples of these are Microsoft Outlook, Mozilla Thunderbird, and the Calendar apps on iOS and Android.

That's not all. Websites and services with calendar functionality are also equipped to export to an iCalendarSync file. Examples include Microsoft Office 365, Apple Calendar, Google Calendar, and Yahoo Calendar.

Several industries benefit from this fantastic tech innovation. For instance, an Airbnb — such a business can use the iCal format to store room availability. Airbnb supports both iCalendar importing and exporting. Exporting it will allow you to view your Airbnb calendar on a third-party platform such as Google Calendar on your smartphone.

Since the late 1990s, the iCal format has been an open standard for transferring calendar and scheduling information between people and computers, and almost any calendaring tool you're likely to use will support it. Of course, there are a few limitations involved where the iCal is concerned. For example, a current problem with the format is that it does not describe what to do with much of the calendar-based data transmitted by it.

On that end, more programming may be needed to decide what to do with the data. Another issue it faces is its non-compatibility with some non-Gregorian calendars, including the lunar calendars used in the Muslim and Chinese calendars.

Introducing Projectsly, the project management software to ease your Task Management and to keep your project team on schedule.

It would be best if you got one working for you now that you know how easy the iCalendar can make things for you. Fortunately, we have just the thing.

Projectsly's icalendarSync can help you effortlessly plan and manage all your tasks from a central location once it is integrated with the calendar of any app that you work on. Ready to streamline project planning process and enhance team productivity with Projectsly? Sign Up 14-day Trial Below are some of the features it boasts of:

Go to the next level with

Our customers are our biggest fans

500apps is exciting for companies that focus on task and project monitoring for increased productivity. Looks great! It also has all apps in the same place, and we can use them in one go! Well done

We are using 500apps for consolidated business growth. All the apps are very handy as we have the best customer success consultants working together with our Sales Director.

My chat rep (Safin) was super helpful and got my issues resolved immediately! I'm looking forward to getting my business started with 500apps!

Awesome customer service. Vicky is very helpful. Can explain and help me to troubleshoot my current issues. Thank you so much.

"SMBs' ultimate choice" - It was packed with features that addressed every need an organization could have. A wide variety of management functions are available, including human resource management, product management, time management, knowledge management, and client management.

"Budget Friendly All-in-One Suite" - Our business has benefited from 500apps' ability to keep track of everything that is relevant. From managing customers and leads to keeping track of our customers.

Business owners can use 500apps to get accurate, timely data that can help them make decisions better. 500apps aggregates the most accurate data and connects you with decision-makers and their confidants with ease.

It is a great platform where I can manage everything regarding my business and customers. 500apps basically solved many problems of mine regarding managing inventory from different vendors, billing customers, sending emails to customers, and managing help desks for customers. I can manage my whole business with 500apps because it provides all the tools I need.